A little over £40,000 funding was made available from Planning Obligations (Developer Contributions) within the Broadstone Ward and planning guidance suggested that funds be allocated for improvements to existing facilities that allow casual play or to enhance the green environment. Two sites were considered suitable for improvement:

Both sites were assessed by appropriate Borough of Poole officers, and the comments of the relevant play inspectors taken into account with regard to the expected lifespan, ‘functionality’ and ease of repair of each piece of equipped play.

Improvement works at Broadstone Rec play area started in January and were completed by the end of March 2018, despite the weather-related challenges. Thank you for your patience!

The new helter skelter slide is installed, the footpath improved and we have removed the steep slope within the space by regrading the levels. 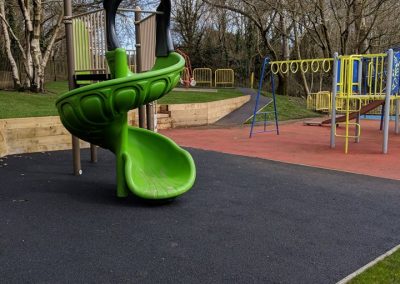 Ready for pressure washing and repainting 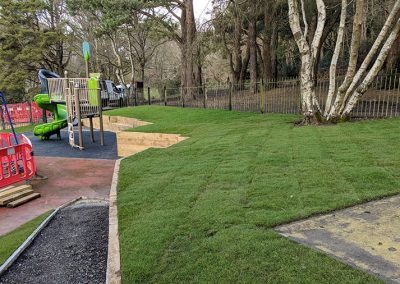 Improving the footpath and regrading the steep slope, March

Improving the footpath and regrading the steep slope, March 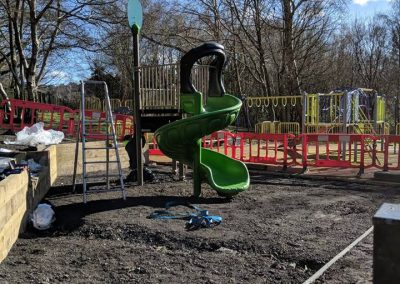 The new helter skelter slide has been installed, February

The new helter skelter slide has been installed, February 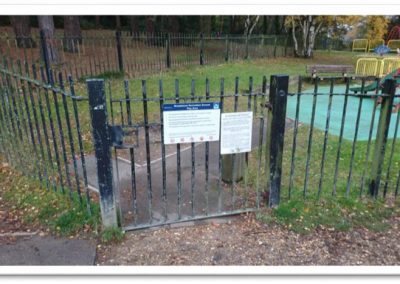 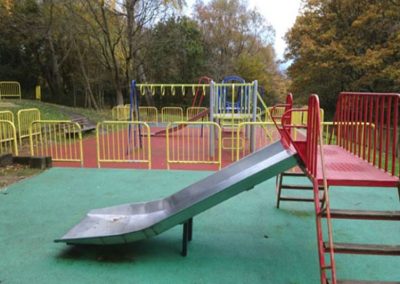 Before: barriers to free flowing play

Before: barriers to free flowing play 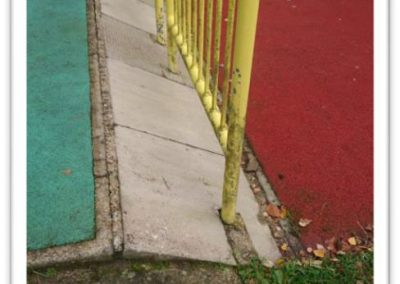 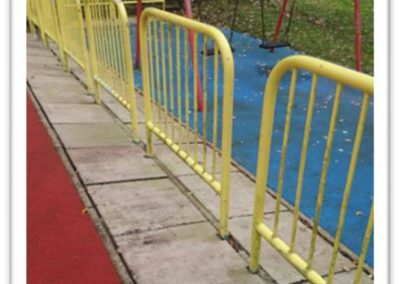 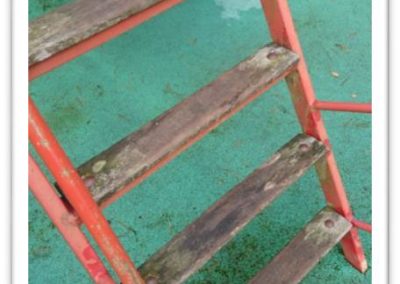 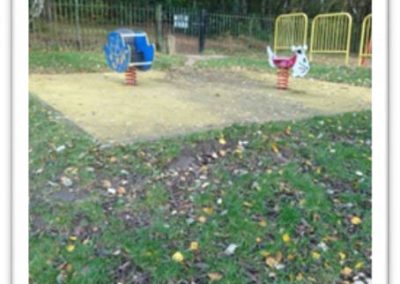 The main concern here was access and free flowing space. It was felt that access could be improved considerably by the relocation of the  gate and extension of the footpath.

Not all items of equipped play complied with current safety guidelines due to their age so needed to be removed/replaced. The play area was set on several levels and ‘dash’ barriers segregated each piece of equipment. Barriers to moving play (e.g. swings) are an important safety consideration but ease of movement around play in general needed to be considered for both children and their carers. Improvements will provide great benefit, particularly to those users that are less able or have mobility problems.

It was also necessary to re-landscape some areas of the play area that harbour detritus and detract from a natural feel. Some retaining brickwork had been constructed on top of timber sleepers that were showing signs of decay and we are re-designing these areas. 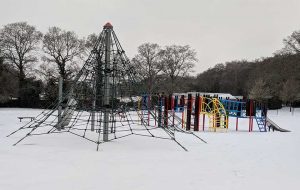 Springdale play area in the snow

Works at Springdale were completed in November 2017 but unfortunately the site was too wet to be used for several months.

Finally conditions had improved a little and the play area was opened in March 2018, with the exception of the small natural play area for toddlers which was still under water.

Thank you for your patience! It has been a challenging project dealing with poor weather and drainage issues but we really hope you enjoy the improvements.

The play equipment at Springdale Rec was considered to be in relatively good functional condition and not in need of replacement, however the relocation of some equipment was seen as a priority due to poor drainage, to ensure better use of the play area in all weathers.

The project has included the installation of a new natural play space that has been designed specifically for toddlers.

Existing play equipment has been enhanced by maintenance work; predominantly stripping and repainting.

Two of the three heavy spring-loaded gates in the perimeter fencing (one of which is permanently locked) have been replaced with lighter-weight self closing gates. Work to replace ‘loose crumb’ material within the safety surfacing will reduce maintenance time and therefore cost.

Some works had previously been undertaken to drain the surrounding areas and a footpath installed to improve access. 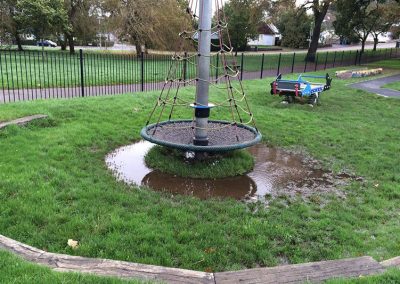 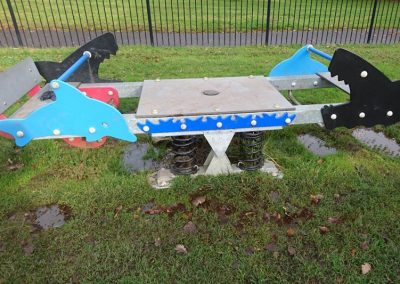 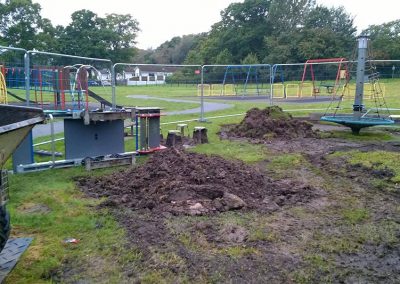 Preparing to relocate the see-saw springer

Preparing to relocate the see-saw springer 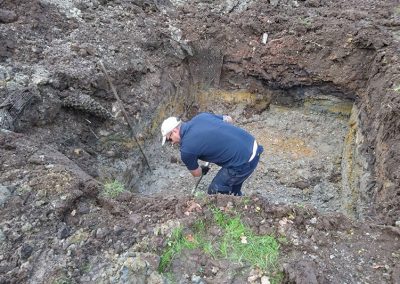 Excavating a drier foundation for the cone climber

Excavating a drier foundation for the cone climber 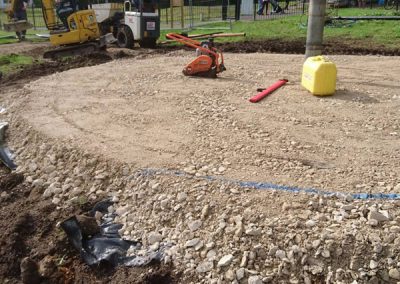 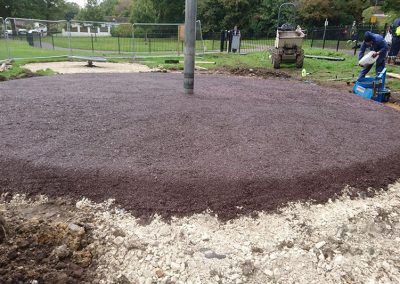 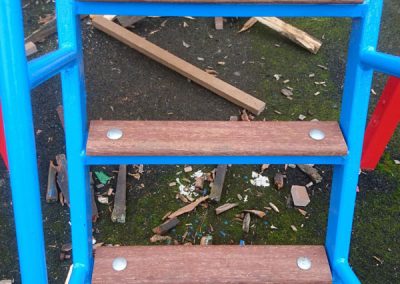 Replacement steps for the climbing frame

Replacement steps for the climbing frame 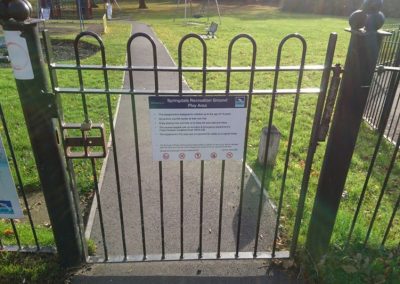 The old heavy spring-loaded gates to be replaced

The old heavy spring-loaded gates to be replaced 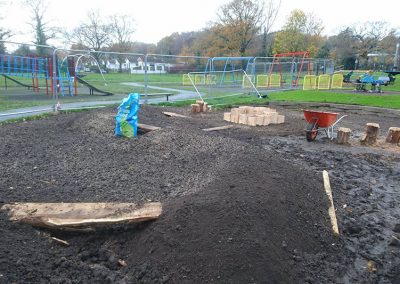 Within the wider Springdale Recreation Ground evidence of dens and drinking was found among the trees and shrubs that border residents property and some management works had already been undertaken. Continuing this management is likely to remove any future risk of nuisance to neighbours, whilst encouraging greater passive surveillance of the site. Property boundaries are secure and management would not compromise security.